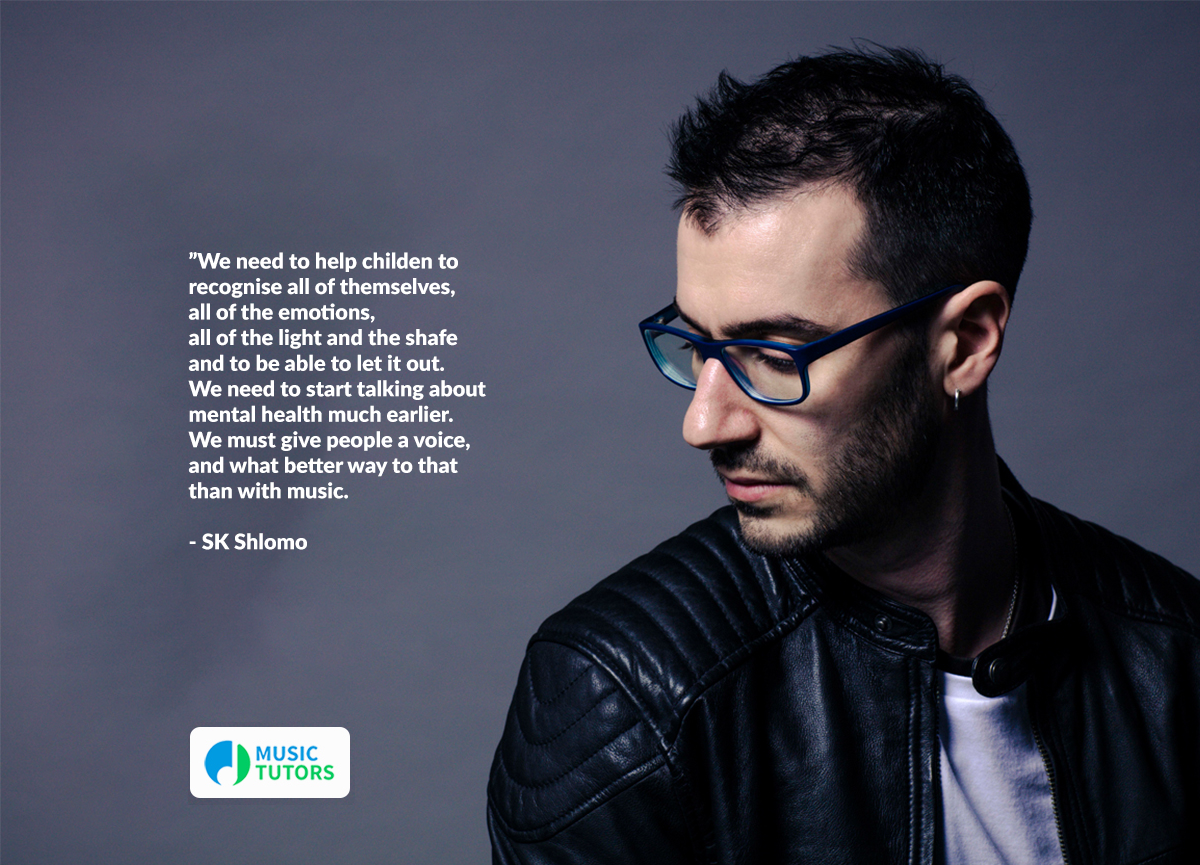 Songwriter SK Shlomo opens up about anxiety and music creation

Dealing with mental health struggles is a prevailing and much discussed issue. Songwriter SK Shlomo opens up about his story and shares a story how music creation eased his anxiety.
Total
0
Shares
0
0
0

When I found out that Beatboxer, producer, artist and songwriter SK Shlomo had added a date in Leeds on his UK tour, I knew we had to catch up about his new music, recent well publicised struggles with mental health and the part that music has played in his recovery.

I have had the pleasure of SK Shlomo’s company a few times in my life. I first met him on a weekend jazz course when we were both teenagers. We were in the same class and hung out like nerdy, nervous teenage jazz drummers do, then we said goodbye and that was that.

4 years later, I randomly bumped into Shlo at a gig in Leeds. We both went to Universities in Yorkshire but it was a completely chance meeting and great to catch up. Shlomo was studying science but wasn’t wildly enthusiastic about the course.

2 years later, I saw him again on the hugely popular BBC music TV show “Later…..”. https://www.youtube.com/watch?v=KtY3wsXKiH8 (check out this clip, it’s a must watch for the faces of the other musicians who have clearly never seen or heard anything like this before.)

The evasive science student had become a superstar beatboxer, appearing on national TV. It’s been quite a journey for Shlomo and it’s been amazing to watch the progression from afar of this incredible musician. Here’s our conversation:

So Great to see you again I guess we should start with where you got started. How did you first get into music?

“I came from a musical family. My dad is a jazz guitarist and my mum is a dancer. It was a very musical household. My parents bought me a drum kit when I was 8 years old, they could see me banging on the pots and pans, they said it was clear that this child needed some outlet! But they wouldn’t let me practice on them after 6 PM and Top of the Pops was on after that and that’s how I started beatboxing, practicing the rhythms and patterns that inspired me when I wasn’t allowed on the kit.

That’s how it started, I was imitating rhythms quite instinctively  but then when I hit my teens, hip hop was just taking off in the UK and I became part of that big wave and quite quickly found an international audience for it, which was really fun.”

Great timing! But then more recently there’s been a pause in the shows. What’s the story?

“I left home when I was 18 and started touring and basically never stopped I was just always on the road. Working, making music, playing bigger and bigger shows. I came off the road because I wanted to make an album. I love beatboxing but I wanted to embrace another side to my musicality. I’m a songwriter, producer and a singer but these are all things that I thought I wasn’t good enough at for the whole time I was on the road. Especially singing, that’s something I would never do in front of people and made me feel really anxious that whole time I was on the road. So I took some time off the road to make the album and I thought that would be really easy you know, take a few months off, win some grammys and then go back out on the road.

But the process of not having the chaotic lifestyle, not having the constant external validation that comes with performing…I just dropped like a balloon, I just dropped. I had a quite horrific breakdown. What I’d been running from my whole adult life finally caught up with me. I got really quite sick, quite quickly and it got to the point that I really didn’t want to be on this planet, it was really quite scary…

Looking back, I’m kind of glad it happened. It helped me speak out. I started with my family and gradually, speaking to more and more people to get help and build a support network. With professional help, I was able to look at what were the underlying causes of this anxiety and depression that were getting me down and what I’d used the constant touring as a distraction from for my whole life. As a result, it took me a long time, nearly two years to get back out on the road and get the album made but I feel like a different human being because I feel much more grounded and much more centred and I feel like I can enjoy every day rather than be in a panic just to get the next one.

I feel really proud of myself for this journey and I’ve made the whole album about mental health awareness, I’ve just done a TED talk about it, I’ve made a theatre show which is going to the Edinburgh Fringe in a couple of weeks and I’m really proud of what’s happened for sure.”

What part did music play in your recovery?

It’s given me this creative outlet to let my stuff out in a safe way, to let the darkness out.

I do this show for kids. It’s called “Shlomo’s beatbox adventure for kids”. Basically my fans have grown up. They’ve got kids and can’t necessarily come out raving anymore so they bring their kids, we all get to listen to loud music and have fun. But what the kids don’t realise is that I’m trying to teach them about wellbeing, about empowerment. There’s a part in the show where I invite them to come up on stage and they always look completely terrified but they do this performance and the crowd goes crazy! You see this journey. I say to the kids I’m telling you today that you are superstar beatboxers but that’s the path that I chose. For me, it’s about finding empowerment, finding out who you are and finding your voice because otherwise people might not understand you. When I was 9 years old and I told people I wanted to be a beatboxer people just had no idea what I meant and I got all kinds of stuff told to me which I think might of been quite damaging but I did believe I could do it. And then, when I got into a really difficult place, the fact I had this natural way of expressing it literally saved me.

You’ve got all this fear and all this darkness and all this danger that’s triggering a fight or flight response, it’s really traumatic but then, life is traumatic, it happens to everyone, we all get traumatised. But, if you can process your traumatic experience and, write a song, about say, suicide rather than actually taking your life. Then you can say it all, let it out, embrace all the different parts of yourself, the dark and the light, and then at the end of that process there’s this thing to show for it.

So many of the songs I wrote were absolute disasters. Not for anyone else to hear but they’re still really important because, my soul got a chance to come out and that is like the kids in the show. I’m saying to them, “let your soul out, even the dark bits because that’s a part of who you are and if you try and crush your dark side it will come back and eat you but if you try and embrace it, you’ll flower, and that’s what I think our kids need to hear.

If we go way back, because now I do a lot of stuff about mental health, a lot of talks, interviews, panels. I think that it’s great all the focus on the conversation. Adults talking about what they’re going through but I feel like we need to go back, back 20 years, back a generation and help children to recognise all of themselves, all of the emotions, all of the light and the shade and to be able to let it out because especially if you’re feeling down or vulnerable, you need to know you’re not going to be judged. We need to teach children to let it out. We need to go back to the birth of these issues and give people a voice and what better way to do it than music.”

Lastly, this conversation is a part of the Sing10 campaign we’re running at musictutors.co.uk. I think if we can get just one person inspired and into singing this month, it will have been a success. What would you say to someone reading this who wants to sing but either doesn’t know where to start or is afraid to begin?

“If you believe that you can’t sing, which was me for a long time, don’t focus on being good, focus on starting. You’ll start one day and then the next day will be a tiny bit better and the day after will be a little less awkward and eventually you’ll be where you want to be but don’t focus on the finish …. just try and start.”

SK Shlomo’s new album, “Surrender” is available on all streaming platforms and do check out the website for mailing list and hard copies in the store.

To find the perfect person to help you with your singing, especially if you’re just starting out, check out our 100+ singing tutors nationwide here. https://musictutors.co.uk/singing 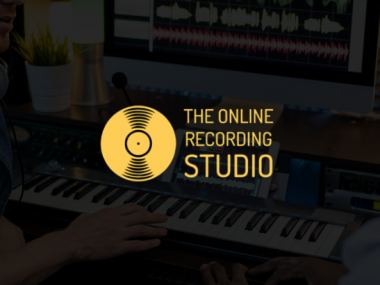 Read More
We have some exciting news for you! We have recently partnered up with the dedicated team at The Online Recording Studio…
Read More
0
0
0 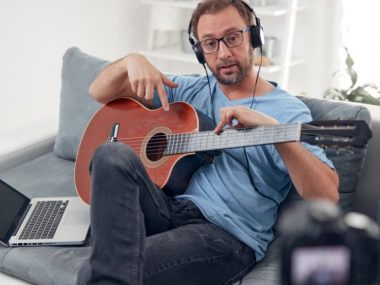 Read More
Online music lessons are becoming more and more popular, and although there is a practical reason why 2020…
Read More
0
0
0 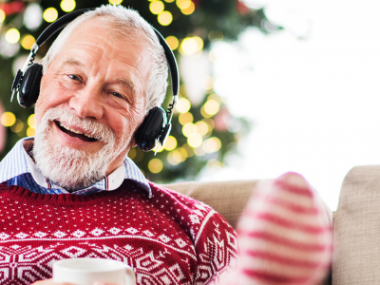 Read More
Ready for a little Christmas challenge?If you, or someone you know, dreams of getting started with playing and…
Read More
0
0
0 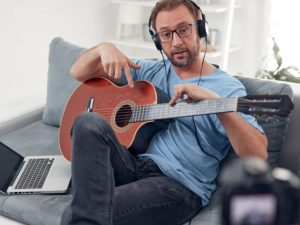 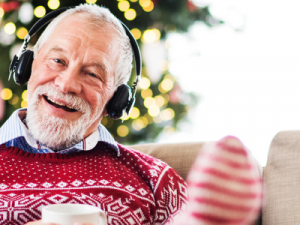 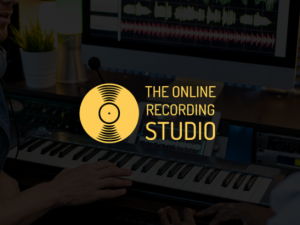 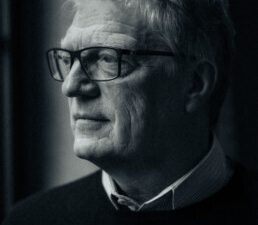